Meet the experienced and friendly doctors who make Fairview Vision Source the leading provider of vision care products and services in northwest Oklahoma. 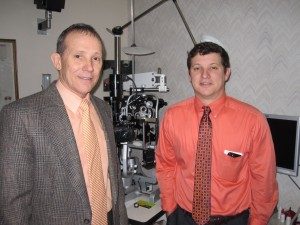 Max Carlisle, O.D. graduated from the University of Houston College of Optometry in 1980.  After graduation, he and his wife Debbie moved to Fairview where he is currently in his 35th year of practicing optometry. They raised 3 children in Fairview and are proud to call northwest Oklahoma home.  In 1986, Dr. Carlisle opened his satellite practice in Seiling.  Max is a member of the Fairview First United Methodist Church.  His interests include airplanes, motorcycling, wakeboarding, snowboarding and riding snow mobiles.  His favorite hobby is spending time with his grandchildren.

Blake Carlisle, O.D. received a Bachelor of Science degree in Mechanical Engineering from Oklahoma State University.  He then graduated from Northeastern Oklahoma State College of Optometry in 2014 and joined the practice.  He and his wife Bethaney, who is from Seiling, could not wait to move back home to raise their two children, Ava and Jett.  Dr. Blake has always enjoyed serving people.  He has watched his father help people in the community with eye health and vision for years, so it was an easy decision for him to choose to join the practice.  Blake is a member of the Fairview First United Methodist Church and a musician in the praise band.  He is also a member of the Federal Legislative Committee.  His interests include duck hunting, barefoot water skiing and flying.

You can schedule your next eye exam with us online!